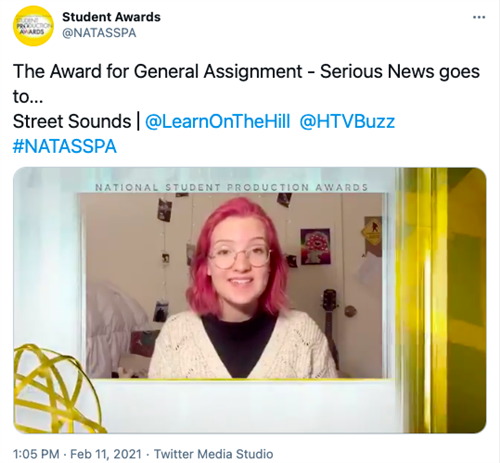 The production was selected as one of five finalists for a National Student Production Award by the National Academy of Television Arts & Sciences – The Emmys (NATAS) in the General Assignment -- Serious News category.

“This is HTV's fourth national award from NATAS in addition to over 30 regional winners,” said HHS broadcast journalism adviser, Dave Davis. “It is about as big of an honor as a high school program can receive. We are thankful for the cooperation of the leaders of the Springfield Street Choir and its members.”

In addition to competing in the NATAS, student journalists at Hillcrest and Central High Schools were recognized by the Student Television Network.

This is a national honor for the top broadcast news shows in the nation.  The winning show was HTV #251, aired in October.  This was Hillcrest's eighth "Excellence Award" from STN.

CHS and HHS students also participated in timed, virtual events in a nationwide contest Feb. 15-16, the Student Television Network National Convention. Media students competed against 100+ schools from across the country to produce dynamic broadcast journalism in a short amount of time.

“These students competed in most of their events from home during the heaviest days of snows and ice,” said Josh Cantrell, CHS media adviser. “They really busted it to represent SPS this weekend.”