Williams Elementary School students and staff gathered outside for one purpose: to be a part of their school’s history.

“It’s like a time capsule of the build,” said Aaron Keeton, superintendent of the Williams construction project. “Their signatures will be a part of the building forever.”

On Jan. 6, Williams students and staff joined Nabholz Construction for a special beam topping ceremony at the Williams construction site. Together, they signed a steel beam that will forever be above the main entrance of the new school. 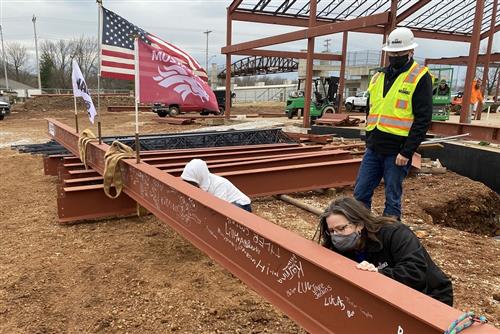 After, attendees were able to safely tour the Williams construction site with Nabholz Construction team members, who identified what spaces would be rooms. Teachers were able to see the framework of their future classrooms, and students walked on the foundation of their future school home. With each step, they gained awareness and pride in their new building, said Desa.

In April 2019, Springfield voters approved Proposition S which enables Springfield Public Schools to make facility improvements to a number of schools, including renovation and expansion of Williams Elementary. The expansion will include space for an early childhood hub at an estimated cost of $3.65 million.  Renovation cost are expected to be $14.32 million. The facility will serve up to 350 K-5 students and 100 pre-K students. Learn more at sps.org/progress