Each fall, Rountree fifth-graders study the book Sadako and the Thousand Cranes. The story illustrates the life of Sadako Sasaki, who was a victim of the bombing of Hiroshima. After her diagnosis of leukemia, she spent her time making paper cranes to represent peace in the world.

Every year on Aug. 5, Japan Peace Day is celebrated in Hiroshima Memorial Park in Hiroshima, Japan. On this day, hundreds of Japanese children flock to a statue erected in Sadako's honor and place garlands of paper cranes. The crane remains a symbol of peace in Japanese culture -- all lessons Rountree students learned while making their own cranes. 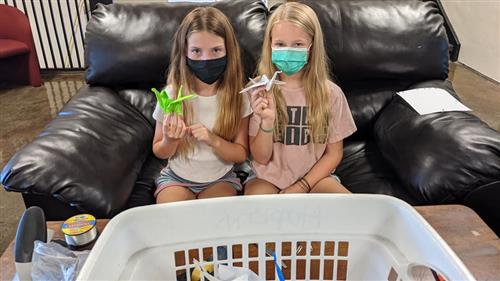 Rountree fifth-graders took action and commemorated this Japanese tradition by making cranes. These paper cranes were hung and on display throughout the Japanese Fall Festival at Mizumoto Japanese Stroll Garden at Nathanael Greene/Close Memorial Park on Sept. 10-12.

"Rountree students didn't just create cranes to be viewed, their cranes also are an invitation to the community," said Nicki Foltz, Primary Years Programme coordinator at Rountree. "Festival attendees could choose a crane and write their wishes for a peaceful world. The students will collect the cranes and read the community's comments, reinforcing that their artwork and action inspires change."